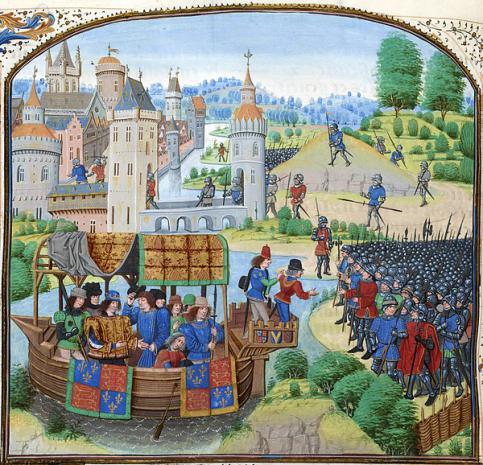 The revolt had various causes, including the socio-economic and political tensions generated by the Black Death in the 1340s, the high taxes resulting from the conflict with France during the Hundred Years' War, and instability within the local leadership of London. The final trigger for the revolt was the intervention of a royal official, John Bampton, in Essex on 30 May 1381. His attempts to collect unpaid poll taxes in Brentwood ended in a violent confrontation, which rapidly spread across the south-east of the country. A wide spectrum of rural society, including many local artisans and village officials, rose up in protest, burning court records and opening the local gaols. The rebels sought a reduction in taxation, an end to the system of unfree labour known as serfdom, and the removal of the King's senior officials and law courts.

Inspired by the sermons of the radical cleric John Ball and led by Wat Tyler, a contingent of Kentish rebels advanced on London. They were met at Blackheath by representatives of the royal government, who unsuccessfully attempted to persuade them to return home. King Richard II, then aged 14, retreated to the safety of the Tower of London, but most of the royal forces were abroad or in northern England. On 13 June, the rebels entered London and, joined by many local townsfolk, attacked the gaols, destroyed the Savoy Palace, set fire to law books and buildings in the Temple, and killed anyone associated with the royal government. The following day, Richard met the rebels at Mile End and acceded to most of their demands, including the abolition of serfdom. Meanwhile, rebels entered the Tower of London, killing the Lord Chancellor and the Lord High Treasurer, whom they found inside.

How did a horned Shamen end up representing the Christian right?