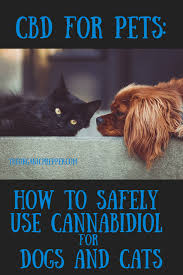 As more people seek safe, natural remedies for their health concerns – and as more states legalize medical cannabis – interest in cannabidiol (commonly known as "CBD") is growing. And it's not just good for humans. A huge amount of research shows that it can also be good for pets.

It's about time. CBD is a fascinating compound that has tremendous therapeutic value.

What is CBD and how does it work?

CBD (cannabidiol) is one of over 100 compounds found in cannabis plants that belong to a class of ingredients called cannabinoids.

Cannabinoids are a diverse set of chemical compounds that bind to special receptors in the human body that make up what is known as the endocannabinoid system.

The endocannabinoid system (ECS) is a biological system which plays many important roles in the human body. It is responsible for the physical and psychological effects of cannabis. For a more in-depth look at the ECS, check out this virtual tour.

Dr. Ethan Russo, a board-certified neurologist and psychopharmacology researcher, believes that many chronic diseases may be caused by clinical endocannabinoid deficiency. In an interview with Project CBD, Dr. Russo explained what a deficiency of endocannabinoid function might look like:

If you don't have enough endocannabinoids you have pain where there shouldn't be pain. You would be sick, meaning nauseated. You would have a lowered seizure threshold. And just a whole litany of other problems. It occurred to me that a number of very common diseases seem to fit a pattern that would be consistent with an endocannabinoid deficiency, specially these are migraine, irritable bowel syndrome, and fibromyalgia. They have some things in common. They're all hyper-algesic syndromes, meaning that there's seems to be pain out of proportion to what should be going on, in other words you can look at the tissues they look okay, but there's biochemically something that's driving the pain. (source)

CBD can help your pets, too.

Like humans, animals have an endocannabinoid system. In the article Claws and Effect: Cannabis Medicine for Pets, Project CBD explains:

Moving Sheep with My Dog Millie

THE ZOONOTIC THREAT: Into the Smart Cities With You! The "Biodiversity" Lie & Agenda 2030

Jim Mellon predicts the end of animal and dairy farming

Why Are Large Numbers Of Birds Suddenly Dropping Dead In Multiple U.S. States?