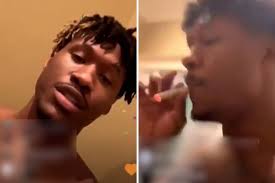 "Pass the blunt, bro," a smiling Irving said into the camera while holding a sizable joint. "Weed … you're addicted to this, and that. I mean, s–t, if I'm going to be addicted to something, I'd rather it be marijuana, which is medical. It's medicine; I do not consider it a drug, rather than the Xanax bars or the hydros or the Seroquel and all that crazy s–t that they feed you."

Irving, who was suspended indefinitely by the NFL last week for violating the league's drug policy, then appeared to smoke on the video as he ignited a lighter off-camera.

UK To Roll Out 'Covid Passports' For Sporting And Music Events