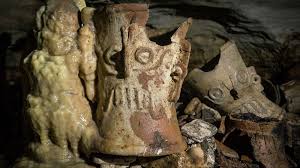 The "cave of the jaguar god," an underground treasure trove of ancient Mayan artifacts, has been explored for the first time since it was deliberately walled off more than 50 years ago.

Located under the ancient city of Chichén Itzá, Mexico, the cave system is packed with hundreds of items dating back more than 1,000 years, such as decorative plates, grinding stones, incense holders, and figures of Balamkú, its namesake jaguar god.

"Balamkú will help rewrite the story of Chichen Itzá," said Guillermo de Anda, co-director of Great Maya Aquifer Project (GAM) and an archeologist at the National Institute of Anthropology and History (INAH), at a press conference in Mexico City on Monday. The hundreds of archaeological artifacts "are in an extraordinary state of preservation," he added.

The cave was originally discovered by local farmers in 1966, who alerted an archeologist named Víctor Segovia Pinto. For some unknown reason, Segovia decided not to explore the cave in much detail and instead blocked the entrance with rocks.

James Brady, co-director of GAM and a professor of anthropology at California State University in Los Angeles, has been puzzling over Segovia's decision to seal the cave.

The New Secrets of Luxor