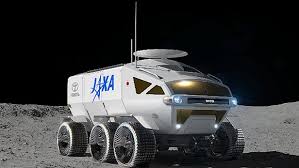 With a range of 10,000 km (6,200 mi), the rover would be about the size of two minibuses and could carry two passengers, or up to four in an emergency.

If the next generation of astronauts to reach the Moon expect to be more than tourists, they are going to need some serious transportation. Though Earth's nearest neighbor may look small as it hangs up in the sky, it's much larger than many people think, with a surface area equivalent to that of Africa. It also has some very rough, mountainous terrain and an environment that is the very definition of hostile.

All of this would be bad enough on Earth, but on the Moon any visitor has to move about in a pressure suit that makes even the simplest of tasks as difficult as deep sea diving in mixed-gas gear, and in which only the shortest of hikes is practical.

It's for this reason that the later Apollo missions included a two-man electric go-kart to carry the astronauts and their gear. It's also the reason why JAXA and Toyota are keen on the idea of a pressurized rover where explorers can work in a shirt sleeve environment and travel for thousands of miles at a go.