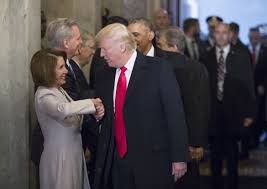 President Donald Trump and Democratic House Speaker Nancy Pelosi are getting along much better these days — and on Wednesday, Trump sent a message of thanks to the Democratic lawmaker for her support.

Why? Both Trump and Pelosi agree: The president shouldn't be impeached.

Trump tweeted Wednesday that he greatly appreciates Pelosi's "statement against impeachment" but says "everyone must remember the minor fact that I never did anything wrong."

Trump claims his first years in office have been "the most successful first two years in history" and asks how anyone with such a record can be removed from office when "impeachment is for 'high crimes and misdemeanors'?"

Ever since the president was inaugurated in 2017, Democratic lawmakers have been demanding the impeachment of Trump.

However, Pelosi's reversal and insistence that Democrats are no longer talking impeachment comes at a notable time.

Special counsel Robert Mueller's investigation is winding down after two years of investigation. In the next few days, Mueller is expected to announce the same conclusion that the independent Senate and House Intelligence committee's also reached: There was zero collusion between the Trump campaign and Russia.

Pelosi told The Washington Post this week she's not for impeachment, at least right now, saying the Republican president is "just not worth it."

"Unless there's something so compelling and overwhelming and bipartisan, I don't think we should go down that path, because it divides the country," she said.

After years of unfounded speculation about collusion and talks of impeachment, Monday's statement by Pelosi was a sudden 180-degree turn for House Democrats. Suddenly, they're asking the country to move on from the Russian story?

It could offer a clue on what Mueller's conclusion will be. Afterall, these Congressional lawmakers have inside access to information the general public can only speculate on.

It seems the Democrats trying to get out in front of a story they can no longer control and are ready to move on.