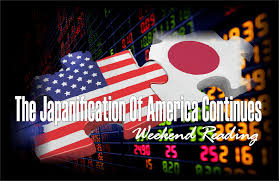 There is a saying in the market that if you want to see the future of monetary policy, you just have to look at Japan. Well, as expected, BoJ Governor Kuroda and his team decided to keep policy unchanged, despite a fresh downward adjustment of its economic assessment.Two out of the nine board members dissented, with one of them being very outspoken in favour of more easing, thus underlining the dovish slant. But, like in Europe, headwinds are mostly blowing from the external environment, leading to weaker exports and industrial output – according to the Bank. In essence, the Japanese economy is feeling the hurt from slower global growth as a result of Brexit, protectionism and the slowdown in China.

And apparently Japanese monetary policy makers still have some hope the economy can recover from this downdraft pretty quickly or that any ongoing weakness would be offset by a better domestic economy. But when many central banks are thinking like that, you can be sure it won't add up! Or are we all banking on the Chinese now? Well, at least Mr. Draghi and Mr. Kuroda seem to be on the same page, with Kuroda saying this morning that "China's stimulus is pretty big and will have an impact".

Even more worrisome is that refraining from action whilst keeping up a brave face perhaps only highlights that the central bank has ran out of options. Despite being arguably the most aggressive central bank in terms of monetary easing since 2008, underlying inflation's basically gone nowhere (inflation ex-food and energy being at a paltry 0.4% y/y). And while there is an increasing chorus –recently joined by finance minister Taro Aso– to lower or make more flexible the BoJ's 2% inflation target, Mr. Kuroda confirmed this morning that this is not (yet) the way to go.

In that sense, Japan may still show where our future lies, but from the latest outcome of the BoJ's deliberations one would rather think there is hardly any future at all.

At the very least, the BoJ's headaches (as well as those of many other central bankers) may stay for some time to come. First of all, US President Trump does not plan to meet with China's Xi at least until next month. While Trump had already stated that he isn't in any rush to make a deal, delay of these talks suggest that there are still 'some' differences to be ironed out first. Moreover, President Trump noted that he expects a conclusion "one way or the other" by then, suggesting that if the two sides haven't managed to bridge the gap, Trump may still follow up on his threat of increasing US import tariffs.

For China, this means that tariffs remain in place for the time being. And while the government may have taken some steps to mitigate the damage, Chinese data is showing signs of economic hurt. After the annual congress, Premier Li said that downward pressures on the economy persist, but added that the government will not let growth fall below a "reasonable range". China has reserved tools to address any further uncertainties that may surface, if this proves to be necessary. Further tweaks to the reserve requirements and interest rates are possible if the economy continues to slow ahead, but don't expect the PBOC to resort to Chinese Quantitative Easing in the near term: Premier Li warned against "flood-like" stimulus, which may have long-term side effects.

And if you think this is all the stuff that's causing headaches, may we just point out that Mr. Trump –who, by the way, just got dealt a blow by the Senate over his border wall emergency– may well look for other ways to get his approval ratings back up by talking tough to its other trade partners, in particular the EU. Mr. Trump used Irish PM Leo Varadkar's visit to the White House yesterday as a stage to express his frustrations with Brexit and Europe. He warned that that"if [the EU] don't talk to us, we're going to do something pretty severe economically.  We're going to tariff a lot of their products coming in because the European Union treats us very, very unfriendly."

Oh, and, according to Bloomberg, the North Koreans apparently are contemplating whether to maintain their moratorium on missile launches and nuclear tests after the disappointing meeting between President Trump and Kim Jong Un.

We'd figure that is already enough for the market to chew on and we will not close this Global Daily with usual "Happy Friday", because it isn't. Our hearts and minds are with the victims of the Christchurch shootings.