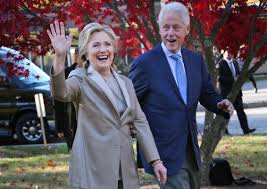 Disgraced former FBI official Peter Strzok told Congress that the bureau did not have access to Clinton Foundation emails while conducting its investigation into Hillary Clinton's email server due to a deal struck by the DOJ and Clinton lawyers, according to the Washington Examiner.

Strzok replied that it was "on one of the servers, if not the others." However, the FBI "did not have access" to the foundation emails because of an agreement "negotiated between the Department of Justice attorneys and counsel for Clinton."

Strzok also said that DOJ attorneys said they lacked "probable cause"  to obtain a search warrant for Clinton's servers "and projected that either it would take a very long time and/or it would be impossible to get to the point where we could obtain probable cause to get a warrant."

The former FBI official also claimed that once the FBI did gain access to the servers, the agency was limited in its investigation due to a "significant filter team" put in place to "work through the various terms of the various consent agreements."

The Right Vs. Left Battle Has REALLY Escalated!

Prof: If Dems Win In 2020, It Would Be "Virtually Impossible For Conservatives Ever To Win Agai