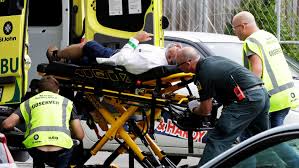 CHRISTCHURCH, New Zealand (AP) — At least 49 people were killed in mass shootings at two mosques full of worshippers attending Friday prayers in an attack broadcast in horrifying, live video by an immigrant-hating white nationalist wielding at least two assault rifles and a shotgun.

One man was arrested and charged with murder, and two other armed suspects were taken into custody while police tried to determine what role they played.

"It is clear that this can now only be described as a terrorist attack," Prime Minister Jacinda Ardern said, noting that many of the victims could be migrants or refugees.

She pronounced it "one of New Zealand's darkest days."

The cold-blooded attack shocked people across the nation of 5 million people, a country that has relatively loose gun laws but few gun homicides and is so peaceful police officers rarely carry firearms. It is also generally considered to be welcoming to migrants and refugees.

The gunman behind at least one of the mosque shootings left a 74-page manifesto that he posted on social media under the name Brenton Tarrant, identifying himself as a 28-year-old Australian and white nationalist who was out to avenge attacks in Europe perpetrated by Muslims.

Using what may have been a helmet camera, he livestreamed to the world in graphic detail his assault on worshippers at Christchurch's Al Noor Mosque, where at least 41 people were killed. An attack on a second mosque in the city not long after killed several more.

Police did not identify those taken into custody and gave no details except to say that none of them had been on any watch list. They did not immediately say whether the same person was responsible for both shootings.

Christchurch terrorist WILL NOT say a word before he is sentenced for massacring 51 Muslim...

Holy Cow This Is A Big Story... And They Found Her!

One man is dead and 11 others wounded in Minneapolis shooting--

Nova Scotia shooter 'may have been a RCMP undercover agent'

Fort Worth, Texas: A Gunman Killed Two Worshipers at the West Freeway Church of Christ...