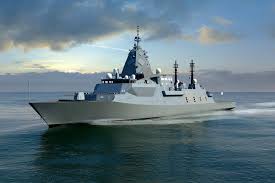 While historically it is perhaps the most common large warship, the US Navy hasn't a single frigate left in its fleet for the first time since 1943 ... and it's looking for a new one. Meanwhile, many other navies, both large and small, are replacing theirs with frigates more suitable to the 21st century. So what will the frigates of the future look like and how will they impact future conflicts?

When we look at modern navies, it's easy to be mesmerized by larger, more glamorous ships like supercarriers and nuclear submarines, but it's thanks to the frigate that these stars of the seas are able to even leave port safely. Called the "eyes of the fleet," frigates fit in size between a smaller corvette and a larger destroyer, and act as a multirole warship that can act independently of the fleet and free up larger ships in medium-threat areas.

It's been this way ever since the first frigates were introduced in the Age of Sail (mid-16th to mid-19th century) and were immortalized in the novels of C. S. Forester, Alexander Kent, and Patrick O'Brien. In those days, frigates were small, fast, square-rigged, three-masters equipped with light armament. They weren't suitable to fight with the rest of the fleet in formal battles, but they were ideal for long-range solo missions all over the world, including patrols, convoy escorts, blockades, anti-piracy and anti-slavery interdictions, and exploration.

A CONVERSATION BETWEEN A GRANDFATHER & GRANDSON – NOVEMBER 2021

The Future of Freedom

Tucker: 'The Country As We Know It Will End' If Democrats Win