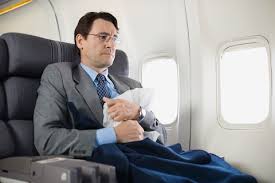 In fact, I've been flying since I was six years old – from New York to Paris on a lumbering Boeing Stratocruiser, a converted, double-decker WWII B-29 heavy bomber.  I even had a sleeping berth.  So much for progress.

Lots can go wrong in the air.  Modern aircraft have thousands of obscure parts.  If any one of them malfunctions, the aircraft can be crippled or crash.  Add pilot error, dangerous weather, air traffic control mistakes, mountains where they are not supposed to be, air to air collisions, sabotage and hijacking.

I vividly recall flying over the snow-capped Alps in the late 1940's aboard an old Italian three-motor airliner with its port engine burning, and the Italian crew panicking and crossing themselves.

Some years ago, I was on my way to Egypt when we were hijacked by a demented Ethiopian.  A three day ordeal ensued that included a return flight to New York City from Germany, with the gunman threatening to crash the A-310 jumbo jet into Wall Street – a grim precursor of 9/11.  My father, Henry Margolis, got off a British Comet airliner just before it blew up due to faulty windows.

Which brings me to the current Boeing crisis.  After a brand new Boeing 737 Max crashed in Indonesia it seemed highly likely that there was a major problem in its new, invisible autopilot system, known as MCAS.  All 737 Max's flying around the world should have been grounded as a precaution.  But America's aviation authority, the Federal Aviation Administration (FAA), allowed the Max to keep flying.  The FAA is half regulator and half aviation business promoter, a clear conflict of interest.