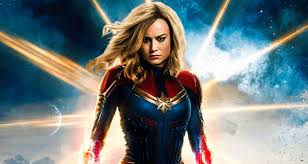 Captain Marvel is a triumph. Finally, we have a female superhero! This is progress. This is new. This is fresh. This is terrifying men all over the planet. Not since Ghostbusters 2016 has a movie featured such a strong female lead. I literally cannot think of ONE other comic book-based movie which has a woman in the title role. I wonder why this is? Oh, I know, it's because Hollywood hates women.

The star of the movie, Brie Larson is also a superhero in real life. She bravely spoke out about the negative reviews A Wrinkly Time received, stating that too many white men had seen it. Now, as a black woman, I watched that film with tears in my eyes. When I saw the 200ft tall Oprah Winfrey preaching to those kids like Disney's version of Jesus while dressed as Ru Paul after an altercation with a shopping trolley, I knew this was the best movie ever made.

So why does it only get 42 percent on Rotten Tomatoes? Simple, because 100 percent of reviews are written by white men and only 42 percent of them are woke enough to accept that Oprah may just be the Second Coming (I personally have suspected this for some time and have written several pamphlets on the subject).