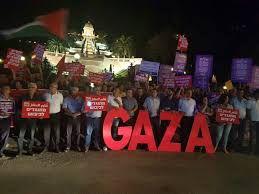 Israel plans to forcibly displace 36,000 Palestinian Bedouins in the Naqab (Negev) region of southern Israel to make way for a military training area and weapons testing facility, according to Adalah, a legal advocacy group for Palestinians in Israel.

That's one quarter of all Palestinian Bedouins living in the Naqab, all citizens of Israel.

The plan, which was announced late last month, "overtly discriminates against the Bedouin population, and considers them an obstacle that must be removed from the landscape in order to clear a path for Jewish settlement and 'development,'" Adalah stated.

Israel's Authority for the Development and Settlement of the Bedouins intends to transfer Bedouins to "poverty-stricken, government-planned townships," violating both Israeli and international laws.

If implemented, Israel will sieze about 65,000 acres of land – an area about one and a half times the size of Washington, DC.

One of the plan's projects is to establish the Ramat Beka military industrial zone.

Israel will move a weapons testing facility owned by leading Israeli arms maker Elbit from the city of Ramat HaSharon in central Israel to the Naqab.

The testing facility, which would be twice the size of Tel Aviv, poses "health, safety and environmental risks" to those living around it, and would require the forcible displacement of thousands of Bedouins and more than 1,200 of their structures.

Elbit has supplied white phosphorus munitions and drones that have been used during Israel's attacks on Gaza. It also manufactures cluster weapons for the Israeli army, helping it circumvent an international ban.

As part of the same plan, Israel intends to establish the Sde Barir phosphate mine, which requires the forcible transfer of thousands of Palestinian Bedouins as well.