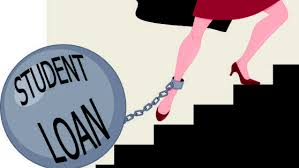 Student loan debt has reached record level highs and its impacts are being felt throughout the entire economy. This crisis will be hard on those deeply indebted, but it is also a drag on the nation's economy as a whole.

For an entire generation of Americans, who were told they would amount to nothing without a fancy piece of paper that would cost them tens of thousands of dollars (or more in some cases) student debt is nothing new. According to NBC News, many so-called Millennials, the desire to attend the best possible school. Couple that with the demands for graduate degrees and skyrocketing college costs, student loans may be fundamentally altering the economy.

A recent analysis from the staff at the Federal Reserve found that the average student loan debt held by those in the 24- to 32-year-old age group doubled from $5,000 to $10,000 between 2005 and 2014. In that same report, the Fed also found that home ownership fell nine percentage points in that same time period for those in that age group.

Student loan debt has already affected the housing market, and because of the amount, most are required to pay back, more and more debt continues to pile up for those already maxed out. And it almost always begins with student loans.

However, once you break that down, you can see the strain that student loan debt has put on Millennials.

Is This the End of College as We Know It?