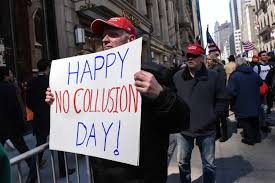 A recent CBS/SSRS poll found that a majority of Americans believe Congressional Democrats should move on from their obsession with phony Trump-Russia collusion narratives.

Only 37 percent of respondents said the Mueller investigation was "justified," while 54 percent said it was "politically motivated."

CBS News reports, "Asked about various ways the report's findings made them feel, half of Democrats (50 percent) said they felt 'disappointed,' and a quarter also said they felt 'angered' (28 percent). Most Republicans said 'pleased' (69 percent) and also "relieved" (63 percent). Respondents could pick any or all offered descriptors."

Most Americans also felt the Mueller investigation was conducted "fairly"–44 percent. While 40 percent said it was "too soon to tell" and 10 percent believe it was conducted "unfairly."

The poll also finds that most Americans are in agreement: the Mueller report should be made public.

In all, 77 percent of respondents say the findings should be public–including 60 percent of Republicans, 90 percent of Democrats and 76 percent of Independents.

Last week, Attorney General William Barr sent a letter to Congress informing them that a redacted version of the report will be released "by mid-April, if not sooner," and he will not send a copy to the White House for privilege review.