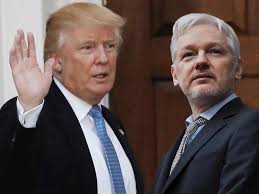 I write to you because I'm seeing something unfold that concerns you, and I have no way of knowing if you're aware of it, nor have I seen anyone else mention it. That is, sir, you are being set up, a trap is being set for you, and unless you are aware of it, you may well walk into that trap eyes wide open.

It may not be in your briefing this morning, but the WikiLeaks organization has reported that high-ranking Ecuadorean state officials have told them Julian Assange will be expelled from their London embassy in a matter of "hours to days". Now, I don't know what your personal opinion is of Mr. Assange, maybe you think he deserves punishment for leaking secret files to the public.

Your personal opinion of Mr. Assange, however, is not the most important issue here, no offense. What's most important to your own situation, as well as that of Mr. Assange, is that the people who are after him are the very same people who have been after you for 3 years, and who will double their efforts after suffering a huge loss due to Robert Mueller's No Collusion report.

What the trap set for you consists of is that if you let these -largely anonymous- deep state actors get their hands on Mr. Assange, you will greatly empower them (even further). But, sir, his enemies inside US intelligence are the same as yours, and empowering one's enemies is not the way to do battle.

We know they are the same people because of Robert Mueller. Mr. Assange was the only way Mr. Mueller could think of to link you to "the Russians". This is a narrative built upon the -false- notion that "Russians" hacked the DNC servers and sent the contents to Mr. Assange. The narrative has been fully discredited by multiple voices multiple times, but Mr. Mueller has never retracted it.

For good reason: this way he -and others- can leave the story, and suspicion, open that there is a link between you, Mr. Assange and the Russians, despite the Mueller report's no collusion conclusion. And do note: it not only maintains the popular and media suspicion of Mr. Assange, it also leaves suspicion of you alive.

Former British ambassador Craig Murray explained the intricacies -again- a few days ago: Muellergate and the Discreet Lies of the Bourgeoisie

Robert Mueller repeats the assertion from the US security services that it was Russian hackers who obtained the DNC emails and passed them on to Wikileaks. I am telling you from my personal knowledge that this is not true. Neither Mueller's team, not the FBI, nor the NSA, nor any US Intelligence agency, has ever carried out any forensic analysis on the DNC's servers. The DNC consistently refused to make them available. The allegation against Russia is based purely on information from the DNC's own consultants, Crowdstrike.

William Binney, former Technical Director of the NSA (America's US$40 billion a year communications intercept organisation), has proven beyond argument that it is a technical impossibility for the DNC emails to have been transmitted by an external hack – they were rather downloaded locally, probably on to a memory stick. Binney's analysis is fully endorsed by former NSA systems expert Ed Loomis. There simply are no two people on the planet more technically qualified to make this judgement. Yet, astonishingly, Mueller refused to call Binney or Loomis (or me) to testify. Compare this, for example, with his calling to testify my friend Randy Credico, who had no involvement whatsoever in the matter, but Mueller's team hoped to finger as a Trump/Assange link.

The DNC servers have never been examined by intelligence agencies, law enforcement or by Mueller's team. Binney and Loomis have written that it is impossible this was an external hack. Wikileaks have consistently stressed no state actor was involved. No evidence whatsoever has been produced of the transfer of the material from the "Russians" to Wikileaks. Wikileaks Vault 7 release of CIA documents shows that the planting of false Russian hacking "fingerprints" is an established CIA practice. Yet none of this is reflected at all by Mueller nor by the mainstream media. "Collusion" may be dead, but the "Russiagate" false narrative limps on.