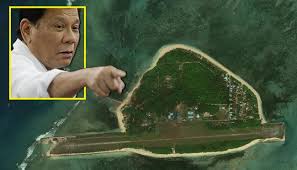 Since January, at least 275 Chinese boats functioning as part of a maritime militia have gathered for varying lengths of time near Thitu Island, according to the Philippines' military. Their tactics raise concerns about their "role in support of coercive objectives," the country's foreign ministry said Thursday. -WSJ

Laying down his 'kamikaze' threat, Duterte told Beijing during a speech to public officials: "Let us be friends, but do not touch Pag-asa Island and the rest," adding "I will not plead or beg, but I am just telling you that lay off the Pag-asa because I have soldiers there. If you touch that, that's a different story. I can tell my soldiers 'prepare for suicide missions'"

Thitu has a small military garrison and a fishing village for some 100 civilians, according to News.com.au.

The coral outcrop sits some 500km from Palawan, the closest mainland island of the Philippines.

The dispute has flared ever since Beijing began aggressively building remote reefs into artificial islands, and placing extensive fortifications upon them. -News.com.au