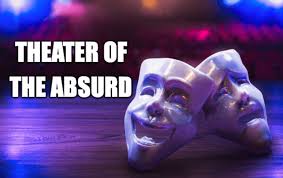 $SPX rallying 23% off the December lows and coming within 1.2% of all time highs on Friday and the president of the United Stated calling for rate cuts and a recommencement of QE.

$SPX Q1 earnings projected to come in negative yet markets ignoring all bad economic surprise data presuming the slowdown to be over.

Markets racing ever higher on negative fund flows, but supported by record buybacks, $270B in Q1 alone, over $1 trillion in just the past 5 quarters.

Daily jawbone efforts from the administration to signal an imminent China deal strategically placed to coincide with market open, market close or futures open ensuring gap ups with many never getting filled:

"The market is way up today, Larry. So today, you're great. When the market goes down — he's not so great. But it's been mostly up, I have to say." Kudlow replies, "I'm only as good as my last trade, sir."