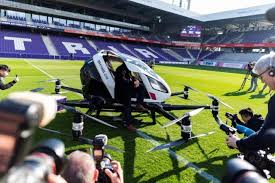 Local officials and journalist gathered in the Austrian capital's Generali Arena football stadium to spectate the two-seater EHang 216, liftoff and fly around the stadium at an altitude of roughly 30 feet.

Derrick Xiong, the co-founder of EHang, told AFP that the drone has been extensively tested and is ready for series production.

A new era of autonomous aircraft services is expected to revolutionize travel across the world by 2025. EHang and Austria's FACC, owned by Chinese aerospace group AVIC, entered into a strategic partnership last year to offer European countries the ability to affordably deploy flying drone services in their major cities.

EHang 216 can fly at 90 mph for 30 minutes, FACC Chief Executive Officer Robert Machtlinger said. "It can travel between 50 and 70 kilometers depending on the payload."

AFP photographer Joe Klama was the first passenger to take part in the flight. He said the cabin is small, with leg room that a taller person might find less-than-adequate.