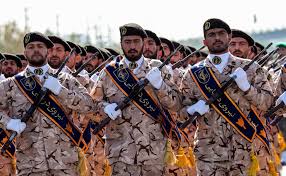 WASHINGTON (AP) — President Donald Trump announced Monday that the U.S. is designating Iran's Revolutionary Guard a "foreign terrorist organization," in an effort to increase pressure on the country that could have significant diplomatic implications in the Middle East.

It is the first time that the U.S. has designated a part of another government as a terrorist organization.

The designation imposes sanctions that include freezes on assets the Islamic Revolutionary Guard Corps may have in U.S. jurisdictions and a ban on Americans doing business with it.

"This unprecedented step, led by the Department of State, recognizes the reality that Iran is not only a State Sponsor of Terrorism, but that the IRGC actively participates in, finances, and promotes terrorism as a tool of statecraft," Trump said in a statement.

Iran has threatened to retaliate for the decision.

The IRGC is a paramilitary organization formed in the wake of Iran's 1979 Islamic Revolution to defend its clerically overseen government. The force answers only to Iran's supreme leader, operates independently of the regular military and has vast economic interests across the country.

The designation allows the U.S. to deny entry to people found to have provided the Guard with material support or prosecute them for sanctions violations. That could include European and Asian companies and businesspeople who deal with the Guard's many affiliates.

It will also complicate diplomacy. Without exclusions or waivers to the designation, U.S. troops and diplomats could be barred from contact with Iraqi or Lebanese authorities who interact with Guard officials or surrogates.

The Pentagon and U.S. intelligence agencies have raised concerns about the impact of the designation if the move does not allow contact with foreign officials who may have met with or communicated with Guard personnel. Those concerns have in part dissuaded previous administrations from taking the step, which has been considered for more than a decade.