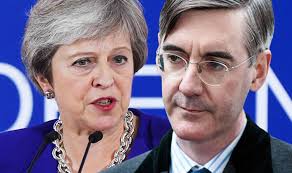 While the week starts off slowly, traders will look forward to a "Super Wednesday" with the EU emergency Brexit summit, ECB meeting, US CPI report and FOMC minutes all slated for that day. According to DB's Craig Nicol, "that should be the highlight of the week ahead however we've also got a busy week for data out of China, as well as a number of scheduled Fed speakers, the annual IMF and World Bank Spring Meetings and China-EU Summit. If that wasn't enough, US banks also kick off earnings season next week."

Starting with Brexit, the latest in the neverending divorce saga is the UK seeking an extension of the Brexit deadline until June 30, with a further headline suggesting that PM May is aiming to ratify the divorce deal before May 23. The PM's letter also announced that the UK will hold European Parliamentary elections on May 23 if a deal hasn't been ratified by then. So markets will now await the EU response with an emergency Summit scheduled for next Wednesday. PM May will reportedly not bring any Brexit plan to a vote before the Summit which means the EU will need to come to a unanimous agreement that a clear plan on a way forward is being proposed, to allow the EU to come to a common position and offer the extension.

For the ECB, after markets were left puzzled by the messaging from the previous meeting and with the subsequent moves in bond markets which has seen Bunds turn negative again, expect there to be plenty of questions directed at Draghi both on the TLTRO details and also the impact of negative rates. Newsflow on tiering has picked up in recent days including an acknowledgement in the latest meeting minutes, with the latest report suggesting that the tiering trial balloon was not quite as successful and the ECB may hold off on announcing details. So markets will particularly be looking for clues as to where the internal debate on persistent low rates on bank margins and profitability now lies.

Shortly after the ECB on Wednesday we'll get the March CPI report in the US. The consensus is for a +0.2% mom core reading which would be enough to hold the annual rate at a relatively solid +2.1% yoy. In the evening we then get the FOMC minutes from the March meeting. A reminder that the message from this meeting was undeniably dovish. The median dot moved to no rate hikes this year with seven officials also seeing the Fed on hold at least through the end of 2020. Deutsche Bank economists made the point that it is clear that the Committee no longer has a strong tightening bias and patience remains the order of the day for some time. With that in mind, expect the minutes to reiterate this more dovish tone, with readers also likely to look out for hints on the composition and duration of the balance sheet.