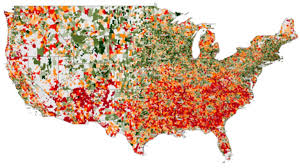 Is there no end to Big Brother's desire to turn America into a mirror image of China?

An article in Go Erie, revealed how the Feds are classifying parts of cities as "Opportunity Zones" or as I call them "Opportunity Surveillance Zones" (OPS ).

"The downtown smart city pilot project was announced in April 2018 and focused on downtown and Perry Square. New LED lighting, video surveillance cameras, and free Wi-Fi were installed in an area encompassing State Street, between Sixth and 12th streets."

In three years, the city of Erie, Pennsylvania will be transformed into a massive surveillance city equipped with facial recognition cameras, license plate readers and spying public Wi-Fi zones.

"According to Schember, that would include security cameras that could read license plates and have facial-recognition capabilities; energy-efficient LED street lights; and free Wi-Fi in public spaces throughout the Opportunity Zone tracts. The intent is to make those areas safer and more attractive for investment."

Using facial recognition to make areas of the city safer, where have I heard that before?

It sounds eerily similar to a story, I wrote about last year.

The story was about Riverhead, New York politicians, claiming that police drones would revitalize downtown and "create a community connection."