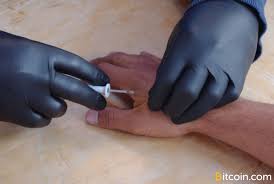 In 2014, Dutch entrepreneur Martijn Wismeijer made headlines by having a pair of bitcoin wallets embedded under his skin. Since then, various cypherpunks and tech journalists have had microchips embedded into their hands. Anyone interested in getting 'chipped,' for the purposes of boasting a bio-implanted bitcoin wallet, should be cautious however, as the procedure is not for the faint-hearted.

Bitcoin Wallets Under the Skin

The idea of getting an integrated circuit device or radio-frequency identification (RFID) transponder embedded into your skin probably seems alien. It's not without its advocates however; over the years various cryptocurrency enthusiasts have engaged in bio-hacking by embedding a microchip with a bitcoin wallet into their hand. On March 15, journalist Bailey Reutzel recently wrote how she got the "Mark of the Beast" and explained how it would now hold her bitcoin. Reutzel said she was inspired when she first met Martijn Wismeijer, otherwise known as 'Mr. Bitcoin.'

In 2014, numerous media outlets reported on Wismeijer's bitcoin wallets embedded into each of his hands. The two wallets were NFC Type 2 compliant chipsets for cold storage and hot wallet use as well. In 2016, Buzzfeed reporter Charlie Warzel described how he got a bitcoin wallet implanted into his hand in "What the Mark of the Beast taught me about the future of money."