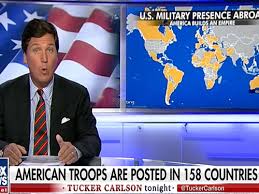 TUCKER CARLSON, FOX NEWS: Here's a helpful hint about how your government works: If you ever see consensus forming in Washington, run. Something awful is about to happen.

For decades, you will remember, there was total consensus that our trade deals could not be better. They helped everyone. Meanwhile, as they were telling us that, America's manufacturing sector died, and huge parts of the middle class died along with it.

Then it was bipartisan consensus on the Iraq War and the stockpiles of weapons of mass destruction we'd supposedly find there, but didn't. A few years later, there was a consensus on banking regulations. That was just before the financial crisis hit. Then there was still more consensus on the creation of an all-seeing surveillance state that was supposed to somehow help you, but that is now scanning your face and reading your texts.

There wasn't much debate in Washington about any of those policies. There should have been.

So it is with some skepticism that we note a new consensus forming here, one about our southern border. It may look bad down there, they're telling us, but calm down. It's fine. Everything is just fine. That's the new word for Max Boot.