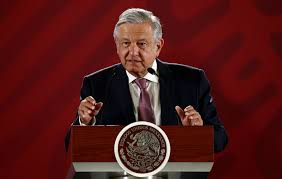 His administration is drawing up a bill to create an independent "Robin Hood" institute "against the corrupt" that would put confiscated goods such as real estate, jewelry and cars into the public's hands, the president told reporters.

"Let's quickly return everything to the people that's been stolen," he said at his regular morning news conference.

For example, the institute could assign seized homes to municipalities for schools, hospitals or elderly care centers, he said. Assets seized by the government tend to have been ransacked or require expensive upkeep, he noted.

He did not estimate the value of the assets, or offer details on how they would be given back to the people.

A 2017 report by the Organisation for Economic Cooperation and Development noted that recent studies estimated that Mexico lost between 5 percent and 9 percent of its gross domestic product (GDP) to corruption annually.