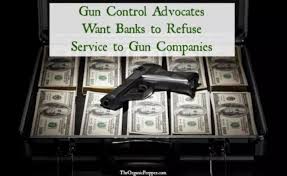 Anti-gun activists and politicians are doing everything they can to effectively disarm the public.

Already this year, extreme and unconstitutional gun control measures have been proposed at the state and federal levels. There has been a lot of pushback, thankfully: a growing number of counties (and even some states) have declared themselves Second Amendment sanctuaries and are refusing to enforce gun-control laws that infringe on the Constitutional right to keep and bear arms. Sheriffs in Washington, Colorado, and New Mexico have publicly stated they will refuse to enforce new gun control legislation – and some are even willing to be jailed for their defiance.

Two extreme gun control bills have already passed the House this year and are awaiting Senate votes (they are unlikely to pass there, experts say).

Gun-grabbers are working on another target: banks.

Gun control advocates "are seeking to use access to financial services as a means to punish and suppress lawful firearm-related commerce," writes the NRA in Pro-Gun Senators Introduce Bill to Prohibit Discrimination in Financial Services:

First came Operation Choke Point, a supposed "anti-fraud" effort during the Obama administration that morphed into a campaign by federal regulators to intimidate banks and payment processers into refusing business with politically disfavored clients, including firearm-related businesses. That program was officially repudiated by the Trump Administration, but for some businesses, the damage had already been done.

Anti-gunners next turned directly to the financial service providers themselves, extorting them with "social justice" condemnation for "financing" mass shootings and insisting they drop their firearm industry clients or impose gun control-like conditions on doing business with them. Several national banks did just that.

Activist institutional investors in publicly-traded gun companies also tried to embarrass those companies with proxy actions designed to portray the businesses in a negative light. To date, those efforts have been largely unsuccessful. (source)

Now, anti-gun members of Congress are attempting to use Choke Point-like tactics in an effort to intimidate banks and marginalize law-abiding businesses in the firearm sector: