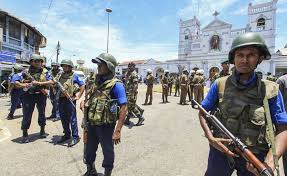 To help ensure justice is done, the Washington Post reported that FBI agents are being sent to assist Sri Lankan police in their investigation. The FBI will also provide laboratory expertise in testing some of the bomb-related evidence, and agents have been scouring FBI databases for anything that could shed light on members of the plot. Already, 24 people have been arrested in relation to the bombing, which authorities have blamed on National Thowheed Jamaath, a domestic Islamist group.

A Sri Lankan security official characterized Thowheed Jamaath as a shell for the Islamic State and said it has been active in Kattankudy, an area in the eastern part of the country and home to one of its largest Muslim populations. The group's leadership is believed to be based there, the official said. The attacks on churches and hotels were carried out by seven suicide bombers, police have determined.

"This is America's fight, too," Secretary of State Mike Pompeo said during a Monday morning press conference, where he reiterated that "radical Islamic terror" remains a threat even after the destruction of ISIS's caliphate. "We have to remain active and vigilant, and it's going to require attention," he said.