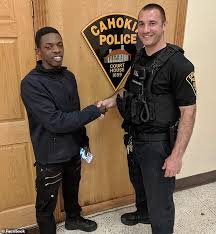 Most people are not particularly thrilled to be pulled over by a police officer – especially not when they are illegally driving to an important job interview.

But rather than being issued a ticket, Ka'Shawn Baldwin was offered a ride.

The 22-year-old man from Cahokia, Illinois had been pulled over by Officer Roger Gemoules for driving a car with expired license plates last week. Not only that, Baldwin says that he did not have a valid driver's license.

Baldwin explained how he had borrowed his friend's car and opted to drive illegally because he was on his way to a job interview and he had no other means of transportation.

"He was very respectful when I pulled him over and you could just tell – I could feel that he really was wanting to get to this job interview," Gemoules told CNN.

Upon hearing his story, Gemoules simply offered to give Baldwin a ride to the interview.

Baldwin was only a few minutes late, but he ended up landing the job – and he says that he is extremely grateful to Gemoules for his part in helping him get to the interview.

George Orwell's 1984 Has Become a Blueprint for Our Dystopian Reality

The Overlapping Infrastructure of Urban Surveillance, and How to Fix It