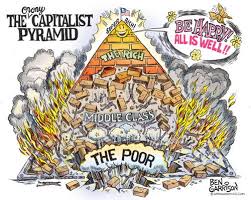 You soon run out of other people's money. And people don't always want to give up their money readily. Or let you boss them around.

Inevitably, the more ambitious your plans, the more people you need to kill.

But today, we turn our attention to those who say we need to "reform" capitalism to save it.

In this category, we lump all those who claim to support free markets – such as most of today's Republicans and Democrats – but still think they can make them work better, with trade barriers, phony tax cuts, fake money, fake interest rates, regulations, controls, etc., etc.

Journalist Edward Luce, for example, writing in the Financial Times, explained that we need to "save American capitalism from itself."

Whenever you read somebody in a newspaper suggest that "we need to," you can be almost sure that the next words are nonsense. This is no exception.