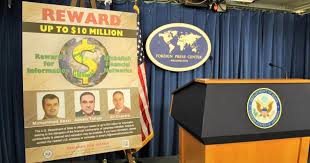 The US State Department is offering up to $10 million for anyone who provides intelligence that would allow the government to disrupt Hezbollah's finances. They want to know who donates to Hezbollah, as well as any business ties.

This is a complicated matter, because while the US is treating them as a straightforward "terrorist organization," Hezbollah is mainly a political party with a substantial role in the Lebanese government, and has ties to charity groups.

The group is  treated in an overly simplistic way by US officials, meaning the State Department sees no problem asking questions about donors and ties. It would be unthinkable, however, for them to make similar inquiries, offering large cash awards, for any other country's major political parties' donors.

The State Department listed three alleged Hezbollah financiers as examples of the activities they are hoping to stop.

Adham Tabaja is allegedly a Hezbollah member who has direct ties to senior Hezbollah organizational elements, including the terrorist group's operational component, Islamic Jihad. Tabaja also holds properties in Lebanon on behalf of the group. Ali Youssef Charara allegedly received millions of dollars from Hezbollah to invest in commercial projects that financially support the terrorist group, and Mohammad Ibrahim Bazzi allegedly provided millions of dollars to Hezbollah generated from his business activities.