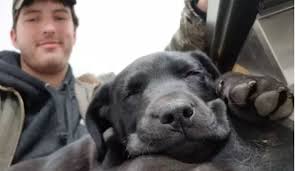 Emerson the puppy was only 6 weeks old when he was dumped at an animal shelter and left to fight for his life against a host of health issues.

Staffers at the NFR Maine animal shelter in North Monmouth, Maine say that in addition to being deaf, the puppy suffered from seizures and canine parvovirus, a highly contagious viral illness.

Despite his struggles, Emerson underwent treatment for the disease and pulled through.

The shelter made a Facebook post about the black Labrador mix in hopes of finding him the perfect home. Several people contacted the shelter to express their interest in adopting Emerson, but when they were eventually contacted by Nick Abbott, staffers knew it was a match made in heaven.

31-year-old Abbott says that he was particularly moved by Emerson's story on social media because he too is deaf.

"Nick said he was interested in meeting Emerson because they would understand each other, being that they both share the same hearing difficulties," the shelter wrote on Facebook. "When Nick and his mom walked into the house to meet Emerson, Emerson made a direct line for Nick and sat at his feet.

This Is Their Biggest Fear | David Icke

On downsizing, paying off $125K debt, & starting a family

8 in 10 Youth Think Gardening is Cool, and Half Would Rather Visit a Garden Center Than a Nightclub

Nicaraguan boy, 10, who was abandoned by smugglers and was found crying alone...