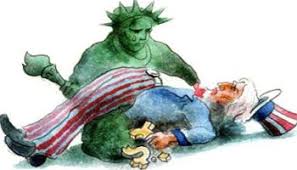 It's pushing a proposal to add a pile of yuan to the $240 billion currency swap agreement between ASEAN plus China, Japan, and South Korea, in order reduce the system's reliance on the US dollar and to enhance its own economic clout in the region, according to the Nikkei.

On May 2, the finance ministers and central bankers of ASEAN – Singapore, Brunei, Malaysia, Thailand, Philippines, Indonesia, Vietnam, Laos, Cambodia, and Myanmar – along with those from China, Japan, and Korea will meet in Fiji to discuss modifications to the swap agreement, the Chiang Mai Initiative.

China, which co-chairs the meeting with Thailand, has added language to the draft joint statement concerning use of Asian-currency contributions to the pool – which for now is still entirely in dollars – as "one option" to enhance the swap arrangement.