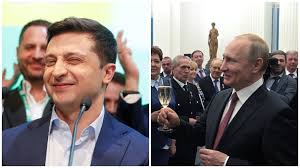 The Russian president and his soon-to-be Ukrainian counterpart Volodymyr Zelensky have been engaged in a sort of media duel after Russia last week offered a fast track to Russian citizenship to Ukrainians living in self-proclaimed republics in eastern Ukraine. Moscow said the move was a humanitarian one and necessitated by Kiev's failure to reconcile with its own citizens living in the east. But officials in Ukraine, including the president-elect, called it an act of aggression.

Amid the uproar from Kiev, Putin last Saturday suggested that the same simplified procedure may be extended to all Ukrainian citizens. Zelensky responded with a scolding Facebook post, in which he mocked the idea that a holder of a Ukrainian passport might be tempted with the Russian one.

"We know what a Russian passport actually gives. A right to be arrested for a peaceful protest. A right not to have free and competitive elections. A right to know nothing about existence of natural human rights," the emotional post said.

He added that Ukraine will "offer Ukrainian citizenship to members of all peoples suffering from authoritarian and corrupt regimes. First of all to Russians, who are suffering pretty much more than anyone else."