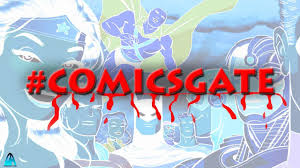 It also addresses a lack of professionalism, inclusivity, objectivity and accountability of the publishers and their employees (i.e. management, editors, writers, artists, etc.) when dealing directly with the customers.

ComicsGaters believe the following are problems that pervade the comic book industry:

The adoption of art styles influenced exclusively by Progressive politics, & by the awkward, stilted injection of said political messages into stories regardless of whether context demands it or not.

The hiring of people based purely on their surface traits and "oppressed demographic" status (Women, Minorities, LGBT) rather than hiring based on merit, affinity or enthusiasm for craft.

The change or outright replacement of beloved classic characters to pander to Progressive and/or Leftist politics instead of creating new characters for this end.

The elitist purge of anything that is "not progressive enough."

The rejection of honest criticism, swept aside as harassment or discrimination.

Participants in ComicsGate sometimes portray their effort as a "consumer revolt." ComicsGate has not, so far, organized any formal boycott against the companies they dislike. A more popular tactic is what is called a "Buycott," in which the consumers purchase comics that match their preferences and publicize their purchases, such as with #MoveTheNeedle.