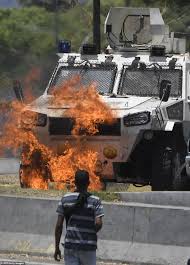 Armoured vehicles operated by soldiers loyal to the besieged president were seen ploughing into demonstrators in front of La Carlota base in Caracas.

Heavy gunfire crackled through the Venezuelan capital on Tuesday after opposition leader Juan Guaido called for a military uprising to oust President Maduro.

In the clip posted online a group of protesters could be seen throwing missiles at a white armoured vehicle. As they launch the assault as second tank emerged from the left and mounted the central reservation of the highway, mowing down a number of people.

One person could be seen falling under the wheels as both vehicles drove off, leaving crowds to swarm around the injured person.

Guaido urged protesters and members of the military to join what he called the 'final phase of Operation Liberty' in a video taken at La Carlota airbase in the capital Caracas while surrounded by heavily-armed soldiers.