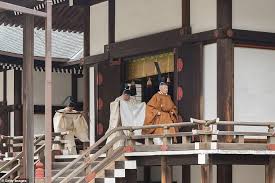 Emperor Akihito renounced the Japanese throne on Tuesday, becoming the country's first ruler in 200 years to step down from the role.

His 59-year-old son officially became emperor at midnight local time following his father's historic abdication from the Chrysanthemum Throne, which is the world's oldest monarchy.

Naruhito will formally take possession of the sacred imperial regalia at a solemn ceremony later on Wednesday but he became the 126th emperor at the stroke of midnight, ushering in the 'Reiwa' imperial era.

Akihito, 85, spent Tuesday morning holding traditional private ceremonies at the Imperial Palace in Tokyo in which he symbolically announced his intention to abdicate to Amaterasu, the sun goddess.

That was followed by a more formal state occasion attended where he gave a televised speech, thanking people for their support during his 30-year reign, before ending with a solemn bow.