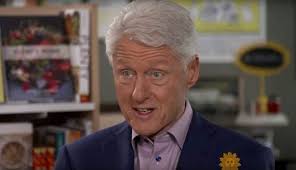 According to documents obtained by The Blast, a trademark application was just filed by the Bill, Hillary & Chelsea Clinton Foundation in Arkansas for a podcast titled, "Why Am I Telling You This?"

The filing states the title will be used for, "Downloadable podcasts in the field of creating global economic opportunity, improving public health, inspiring civic engagement and service and the presidency of William J. Clinton."

It's unclear if President Clinton plans on hosting the podcast himself, or will just be providing content and occasional quips about his presidency.

The move is interesting and could explain Bill and Hillary dipping their toes in pop culture recently, like appearing in a YouTube video with political satirist, Jordan Klepper.

As for the name of Bubba's podcast, we can only speculate about the topics he'll cover, but we're guessing it's not going to be about playing the sax.