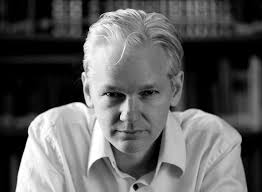 Dressed in jeans, a dark jacket and a T-shirt, Assange appeared on a video screen inside a cramped courtroom in Westminster Magistrates Court in London. "I won't surrender to the U.S. for doing journalism that has won many awards and protected lives," Assange told the court, according to a tweet from a USA Today correspondent.

Assange was arrested on April 11 after Ecuador lifted his political asylum at its embassy in London where Assange had lived since June 2012. On that day the U.S. unsealed an indictment against the publisher for conspiring with WikiLeaks' source Chelsea Manning to crack a password needed to hide Manning's identity.  Protecting a source is a routine part of investigative journalism.

The U.S. also filed a request that day to the British government to extradite Assange to face the charges, which carry a maximum sentence of five years in prison. Thursday was Assange's first appearance in the extradition case before Judge Michael Snow.

A large group of Assange supporters gathered outside the courthouse as well as inside Court Three, where many sat on the floor for the 10-minute hearing, the Daily Express in London reported. Many reporters and supporters were unable to gain entry after the hearing was moved to a smaller courtroom.