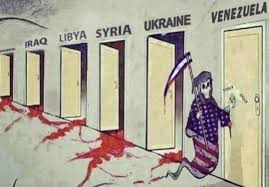 This week, leading US neocons openly threatened that if the CIA's latest attempts to stage a coup to overthrow Venezuela's Maduro government failed, Washington might send in the Marines.

Well, the coup was a big fiasco and the Venezuelan army didn't overthrow President Maduro. The CIA also failed to overthrow governments in Moscow, Tehran and Damascus. Its only 'success' to date has been in overthrowing Ukraine's pro-Moscow government and putting a bunch of corrupt clowns in its place at a cost near $10 billion.

The US has not waged a major successful war since World War II – unless you count invading Grenada, Panama and Haiti, or bombing the hell out of Iraq, Syria, Somalia and Libya. That's a sobering thought given the Pentagon's recent announcement that it is cutting back on little colonial wars (aka 'the war on terror') to get ready for real big wars against Russia and China, or even North Korea.

Venezuela is in a huge economic mess thanks to the crackpot economic policies of the Chavez and Maduro governments – and US economic sabotage. But my first law of international affairs is: 'Every nation has the absolute god-given right to mismanage its own affairs and elect its own crooks or idiots.'