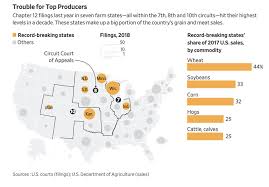 Now it seems some of those farmers are closing up shop, liquidating machinery and land, all to stem financial pressure, a dozen or so farm-equipment auction houses told Reuters.

The farming crisis unraveling in the Midwest has created a monsterous boon for auction houses, which reported that their collective business activity jumped 30% in the past six months, compared to the same period a year earlier.

Reuters noted that the revival of the family farming tradition has collapsed. Ahead of the US recession of 2007-2008, agriculture prices were soaring, attracting many young people from their city jobs to their family's fields.

But spot prices crashed from February 2008 to December 2008, then rebounded from early 2009 to mid-2011. By 2012, farming profits erupted, as corn, soybean, and wheat prices jumped amid rising global demand and tight supplies. It was the first time in several decades that the total number of farmers 44 or younger in the Midwest increased.