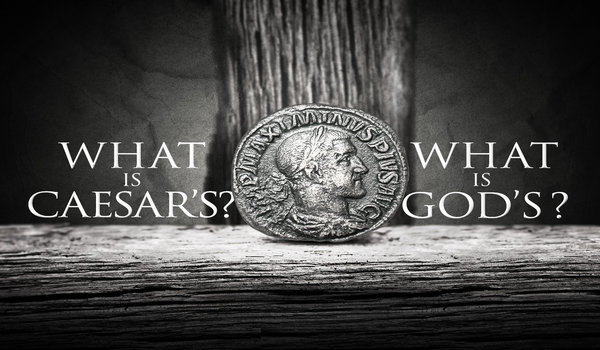 Christians have traditionally interpreted the famous passage "Render therefore to Caesar the things that are Caesar's; and to God, the things that are God's," to mean that Jesus endorsed paying taxes. This view was first expounded by St. Justin Martyr in Chapter XVII of his First Apology, who wrote,

And everywhere we, more readily than all men, endeavor to pay to those appointed by you the taxes both ordinary and extraordinary, as we have been taught by Him; for at that time some came to Him and asked Him, if one ought to pay tribute to Caesar; and He answered, u2018Tell Me, whose image does the coin bear?' And they said, u2018Caesar's.'

The passage appears to be important and well-known to the early Christian community. The Gospels of St. Matthew, St. Mark, and St. Luke recount this "Tribute Episode" nearly verbatim. Even Saying 100 of non-canonical Gospel of Thomas and Fragment 2 Recto of the Egerton Gospel record the scene, albeit with some variations from the Canon.

But by His enigmatic response, did Jesus really mean for His followers to provide financial support (willingly or unwillingly) to Tiberius Caesar – a man, who, in his personal life, was a pedophile, a sexual deviant, and a murderer and who, as emperor, claimed to be a god and oppressed and enslaved millions of people, including Jesus' own? The answer, of course, is: the traditional, pro-tax interpretation of the Tribute Episode is simply wrong. Jesus never meant for His answer to be interpreted as an endorsement of Caesar's tribute or any taxes.

The objective of this piece is not to provide a complete exegesis on the Tribute Episode. Rather, it is simply to show that the traditional, pro-tax interpretation of the Tribute Episode is utterly untenable. The passage unequivocally does not stand for the proposition that Jesus thought it was morally obligatory to pay taxes.

II. THE HISTORICAL SETTING: THE UNDERCURRENT OF TAX REVOLT

In 6 A.D., Roman occupiers of Palestine imposed a census tax on the Jewish people. The tribute was not well-received, and by 17 A.D., Tacitus reports in Book II.42 of the Annals, "The provinces, too, of Syria and Judaea, exhausted by their burdens, implored a reduction of tribute." A tax-revolt, led by Judas the Galilean, soon ensued. Judas the Galilean taught that "taxation was no better than an introduction to slavery," and he and his followers had "an inviolable attachment to liberty," recognizing God, alone, as king and ruler of Israel. The Romans brutally combated the uprising for decades. Two of Judas' sons were crucified in 46 A.D., and a third was an early leader of the 66 A.D. Jewish revolt. Thus, payment of the tribute conveniently encapsulated the deeper philosophical, political, and theological issue: Either God and His divine laws were supreme, or the Roman emperor and his pagan laws were supreme.

This undercurrent of tax-revolt flowed throughout Judaea during Jesus' ministry. All three synoptic Gospels place the episode immediately after Jesus' triumphal entry into Jerusalem in which throngs of people proclaimed Him king, as St. Matthew states, "And when he entered Jerusalem the whole city was shaken and asked, u2018Who is this?' And the crowds replied, u2018This is Jesus the prophet, from Nazareth in Galilee." All three agree that this scene takes place near the celebration of the Passover, one of the holiest of Jewish feast days. Passover commemorates God's deliverance of the Israelites from Egyptian slavery and also celebrates the divine restoration of the Israelites to the land of Israel, land then-occupied by the Romans. Jewish pilgrims from throughout Judaea would have been streaming into Jerusalem to fulfill their periodic religious duties at the temple.

Dear Libertarians, We Are In Trouble