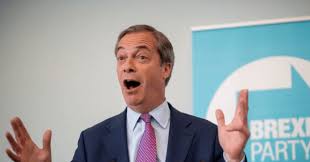 While the figures reported by major pollster YouGov remain comparatively static to their last figures published last week, the newly minted Brexit Party has managed to rise one point from an already historic 34 to 35 per cent, while the Conservatives have dropped one.

Now languishing in single digits at nine per cent, the party which presently rules the country under Prime Minister Theresa May is set to have its worst result in a national poll at any time in its nearly two-century history.

European Union elections in the United Kingdom assign seats regionally on a 19th-century Belgian system designed to allocate representation to smaller parties more fairly. A map of projected results created by Election Maps UK puts the Brexit party in first place in every English and Welsh region except London, and even coming second in Scotland.

Despite the continued good news for the Brexit party, pollster results tend to be taken with a pinch of salt in the United Kingdom, as the United States, especially after the failure of pollsters to predict the 2016 Brexit referendum result. Even on the day of the poll, YouGov — the author of today's poll — called it for remain.