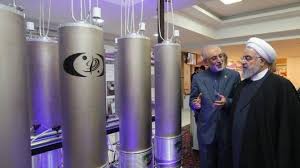 It appears Iran is following through on its prior warnings issued to European leaders that it's ready to surpass enriched uranium production limits previously agreed to under the 2015 nuclear deal (JCPOA). News that Iran has "quadrupled its production of low-enriched uranium" comes as rhetoric between Tehran and Washington has reached new belligerent heights, with President Trump tweeting Sunday that US attack would be the "end" of Iran.

Crucially, on Monday both the semi-official Fars and Tasnim news agencies cited Iran's nuclear agency spokesman Behrouz Kamalvandi to say the country would reach the 300-kilogram limit set by the nuclear deal merely "in weeks" — in what appears counter-threat signalling to Washington. Iran has also for months complained the EU is failing to hold up to its end of the bargain under the JCPOA to provide sanctions relief.

The AP notes of the Iranian media statements that "While the reports said the production is of uranium enriched only to the 3.67% limit set by the 2015 nuclear deal that Tehran reached with world powers, it means that Iran soon will go beyond the stockpile limitations established by the accord" if it continues on this pace.

Kamalvandi's statement made clear this didn't mean Iran increased the number centrifuges in use — a key requirement of the deal — however, The Wall Street Journal cited European diplomats two weeks ago who said they were informed by the Iranians of thier intent to ramp up research efforts into centrifuges that could produce highly enriched uranium faster.

Amid renewed US pressures and military build-up in the Persian Gulf of late, Tehran has little confidence that the EU is capable of facing US sanctions, and despite some meager past efforts, such as the attempt to establish a 'SWIFT alternative,' EU initiatives to salvage the deal have been too little too late.

Assuming war is not triggered by then, the Iranians have issued Europe an ultimatum to come up with new terms by July 7th or else weapons-grade levels of uranium will be enriched, per the AP:

Iran has said it would begin backing away from terms of the deal, setting a July 7 deadline for Europe to come up with new terms or it would begin enriching uranium closer to weapons-grade levels. Tehran long has insisted it does not seek nuclear weapons, though the West fears its program could allow it to build them.

British Foreign Secretary Jeremy Hunt told journalists in Geneva that Iran should not doubt the U.S. resolve, warning that "if American interests are attacked, they will retaliate."