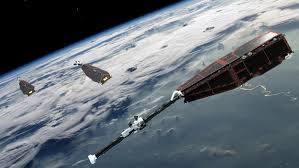 Swarm Technologies makes the smallest satellite at one-quarter the size of a 1U cubesat. They raised $25 million in a series A. The round was led by Craft Ventures and Sky Dayton, founder of EarthLink and Boingo, with participation from Social Capital, 4DX Ventures and NJF Capital.

The panel had as a Moderator: Celestine Schnugg, Founder, Boom Capital

Swarm's 1/4U satellites have a radar signature as bright as that of conventional CubeSats. This is due to a state-of-the-art radar retro-reflector technology onboard their satellites. Their satellites have internet data speeds for text messages and cost a few hundred thousand dollars each. Each of the Swarm satellites weighs about 300 grams or two-thirds of a pound. They are the size of sandwich (10 cm X 10 cm X 2.8 cm).