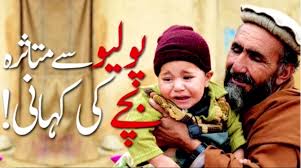 This jingoistic narcissism is on full display in a Washington Post editorial (5/10/19) that blamed a recent upsurge in polio in Pakistan on "guns, fear and fake news"—while ignoring the CIA's central role in the crisis entirely.

The editorial, "The World Is Close to Conquering Polio. Humans Are Holding Us Back," started off naming the Official Oriental bad guys:

The world's long and ambitious quest to conquer polio has come tantalizingly close to success, only to slip away because of unforgivable behavior by thugs and exponents of ignorance.

The "thugs" named by the Post are "hard-line Islamist forces," fueled by nebulous "social media." While no doubt Islamist forces and their ability to communicate amongst themselves contribute to the problem, the other party primarily responsible for the recent surge in anti-vax sentiment in Pakistan—the US Central Intelligence Agency—is notably unmentioned.

Reading the scolding editorial, one would never imagine that anti-polio efforts in Pakistan (as well as Afghanistan), according to numerous reports—including the New York Times (4/29/19) last month—have been severely undermined by the 2011 revelation (Guardian, 7/11/11) of a secret ruse cooked up by the CIA to use a hepatitis B vaccine drive to gather DNA in an effort to track the whereabouts of Osama bin Laden (efforts, it's worth nothing, that didn't actually help in finding bin Laden).