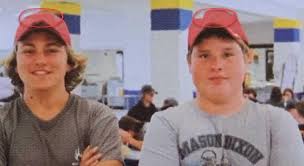 Littlestown High School student Jeremy Gebhart and a friend say they decided to show support for President Trump back in October during the school's spirit week. Someone snapped a pic of them which eventually made it to the school yearbook … albeit with an alteration.

"We were like they blurred our hats out!" Gebhart said.

"I just think that whoever did this doesn't like Trump," Gebhart said.

At a public school? Naw! Couldn't be!

"I was infuriated because he wears that hat because he supports our president," said Lorriane Gebhart, Jeremy's mother. "He's not doing anything illegal he's wearing a hat of support," she added. …

Gebhart says she is disappointed in the school's decision to blur the hats.

"It's very upsetting," said Gebhart. "Someone used this on purpose to blur out that Trump logo and make their own statement," she added. …