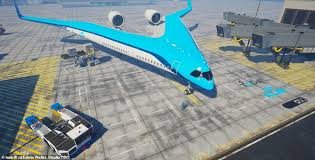 The stunning 'Flying-V' design, financially backed by KLM, has the same wingspan as existing planes and is able to carry up to 314 passengers.

It is named after the iconic Gibson Flying-V electric guitar used by a number of legendary players - from Eddie Van Halen and Jimi Hendrix, to Brian May and Keith Richards.

The concept craft, developed by researchers at Delft Technology University in the Netherlands, flares diagonally backwards from it nose to create the striking V-shape.

Its designers say this unique configuration uses 20 per cent less fuel. The wings would host the passenger space, cargo hold, fuel tanks and all other infrastructure, it is believed.

A pair of turbofan jet engines will be mounted at its rear and the design  would drastically reduce both the carbon footprint of air travel and the expenditure on fuel.

Pieter Elbers, the KLM chief executive, refused to reveal the exact extent of the project but it is being heralded as a potential leader in the field of 'sustainable aviation initiatives'.

Its size makes it a comparable rival to the traditional Airbus A350 and the Boeing 787 and it would be able to use existing gates, hangars and runways.