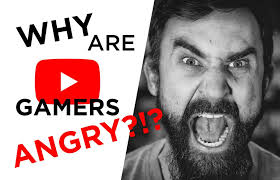 The video game world is no stranger to controversy, but a new class of YouTube commentators is turning anger into influence.

How to make a successful video on one of the internet's most popular sites:

Step 1: Find something to be angry about. Go to online forums, track what's hot on Twitter and figure out the outrage of the day.

Welcome to 2019, where some influential gamers on YouTube have learned what many others, including the president of the United States, have figured out: Anger sells. It sells big.

Starting last year, a new cadre of negative YouTube gaming commentators came to prominence. Almost in unison, they each enjoyed spikes in audience and view counts, attracting hundreds of thousands of subscribers. That translated into millions of views a week as they dissected the video game industry's missteps, misadventures and controversies. The views get rewarded by YouTube in ad dollars.

Their negativity comes in many forms. Some YouTubers produce a stream of videos criticizing every imaginable fault a game could have. Visual bugs. Awkward controls. Stupid storylines. Others obsess over game developers' attempts to fix glitches. There are commentators who rail against efforts to upsell players, who typically shell out $60 for a game. These microtransactions, as they're known, can include different character designs, new looks for weapons and additional stories, and are a source of constant irritation for vocal commentators, who see them as a rip-off. Others veer into criticism of outspoken game company executives. Some attacks get personal, criticizing members of the gaming community for their looks or perceived political beliefs.

The Electronic Entertainment Expo, known as E3, will likely prompt all of the above when it kicks off in Los Angeles next week.

There's no single formula, and the YouTubers have taken different tacks, such as high-production videos with formal scripts or off-the-cuff rambling. But all rely on the same strategy: getting the audience angry.

Some, including Tyler Denny, who runs the CleanPrinceGaming channel, which has more than 631,000 subscribers, create slickly edited video essays dissecting news reports and rumors of corporate screw-ups that lead to a game's disappointing release. Some of his most popular videos are a series titled, "[Game Name] Didn't Just Die, It was Murdered."

Where Capitol rioters were when they posted gloating Parler siege videos: