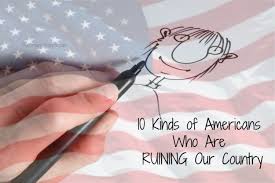 Have you noticed the instant judgment world we're living in? Are you perhaps a part of it? We are a nation of caricatures, where one opinion leads others to see an exaggerated personality, the qualities of which are desirable or deplorable. (Keep your MAGA hat on – not in that Hillary Clinton way – in the Merriam Webster deserving of strong condemnation way.)

We've become so staunchly fixed in our opinions that there's simply no room for those who have other opinions. We instantly decide based on one snippet of an opinion that a person is "good" or "bad."  America is incredibly polarized on such a wide variety of topics and people respond in extremes. And you better hope you have a good guardian angel if someone takes a video of you at an angle that tells something other than the real story – you'll face the wrath of the entire internet all at once.

There are all sorts of people weakening America, but no one can agree on the worst culprits.  And that in itself is a problem – there's a total lack of acceptance for the opinions and beliefs of others. Somehow, this country that used to value rugged individualism has turned into something entirely different. Everyone is seen as a caricature as opposed to an actual person with a variety of diverse opinions.

Here are 10 examples of the people who get blamed for everything that is wrong with America.

(And yes. I know you're offended.)

Are you a Christian? You know the right way to live. You know that you have to work to eat. You know where you're going after this life is done.  But according to some, you're too Christian and you're pushing your religion on them. Your beliefs are offensive to many people and the fact that you teach your children your religion is practically criminal. In a country born on the freedom of religion, your belief system now marks you as backward, uncaring, and downright ignorant of science.

Are you not a Christian?  You think those churchy people are silly with varying degrees of scorn. You know that science is the answer and that facts are all that matters. You know where you're going after this life too. You told your kids to bury your remains and plant a tree on them so you can at least be of some use as a rotting corpse. Well, this non-Christianity means that you are, on principle, a bad person even if you haven't done anything wrong. If heaven forbid, you are an atheist or an agnostic person, then you are just waiting for the opportunity to rape and murder because you don't have Jesus in your life. How can you even know right from wrong if you never go to church?