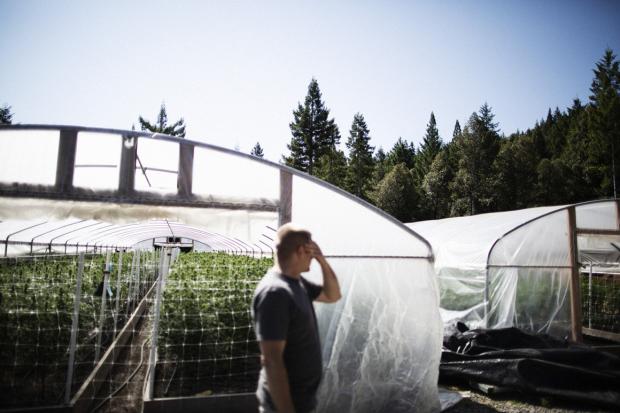 In the forests of Northern California, the regulatory state—not the DEA—is forcing thousands of growers out of business, or back underground.

EUREKA, Calif. — On a sunny day in the spring, Thomas Mulder walked through his greenhouse, down a narrow path between two long, knee-high, wooden planters. In a few weeks, the greenhouse would be full of marijuana plants a foot or two high—indica-sativa hybrid strain Sour G, or White Tahoe Cookies with its characteristic golden hairs around the flower. A few more months and the plants would reach Mulder's shoulders. But at that moment, the planters were empty as Mulder gestured with his hands to show how tall his crop would eventually become. Mulder has three greenhouses that sit on this flat patch of land deep in the mountains of Humboldt County. This part of his farm is accessible only by a steep, newly paved road that passes in and out of Humboldt Redwoods State Park, and giant trees crowd so close on either side of the property that you don't even notice Mulder's farm until the last bend of the road.

It's pretty obvious why Mulder's parents chose this place in the late 1970s to grow marijuana. Back then, camouflage ropes pulled tall branches over the clearing to hide the illegal but highly prized crop from Drug Enforcement Administration helicopters; huckleberry bushes grew among marijuana for extra concealment. Now, the array of bright white buildings would be easily spotted from above, that is if anyone was up there looking. The berry bush camouflage came out when Mulder bought this land a decade ago when California became the first state to approve medical marijuana.

Are All People In California Complete Morons?

Water: Making the Most of It - Growing in the Mega Drought